The new dG (digital guide) takes birding another step further into the digital world. It's not be the first product ever to do so, but it might become the first one to attract a larger buyership among beginning birders - sooner or later. I got the chance to test the dG for several weeks paired with my Samsung S10e - this report is based on my experiences. 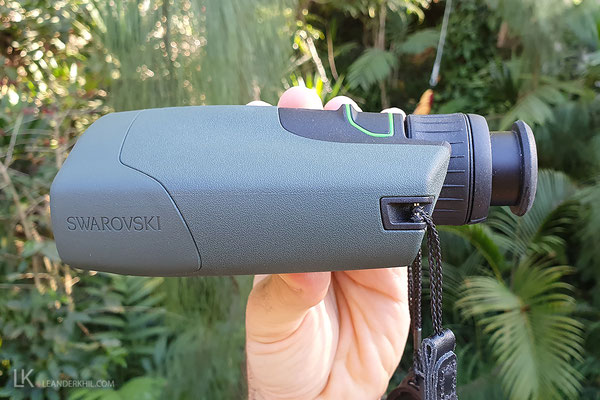 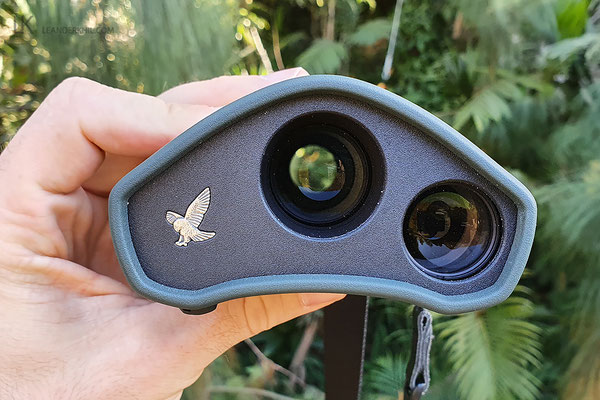 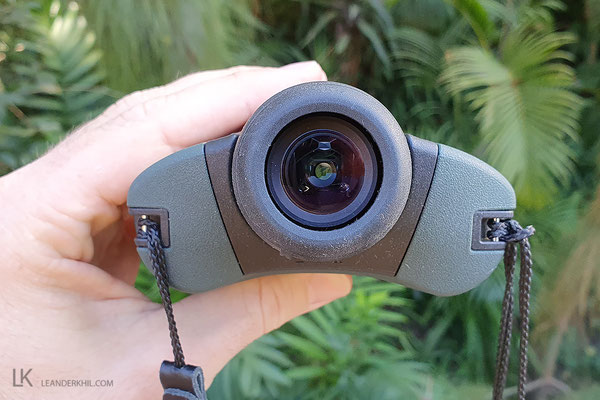 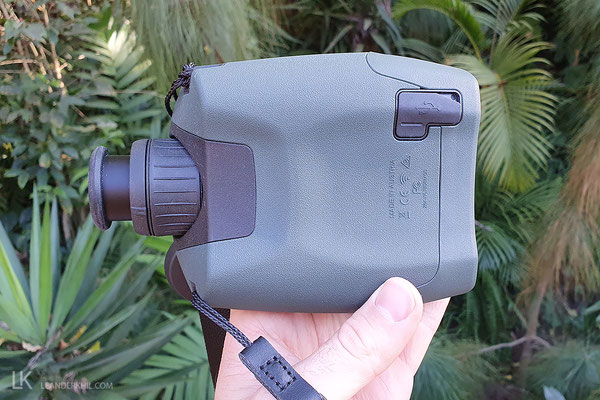 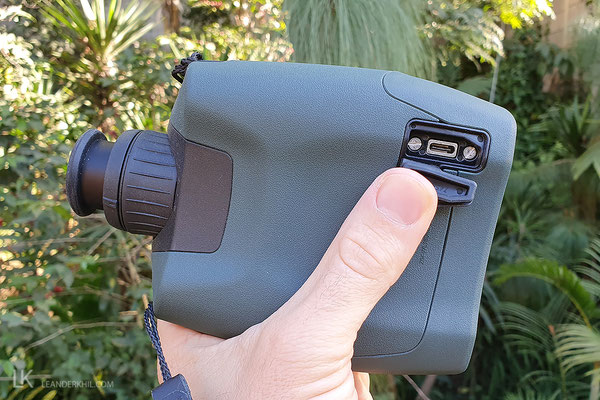 What is the dG?
The dG is a monocular device for wildlife watching with a built-in 13 megapixel digital snapshot camera with very basic features. This means that it has one eyepiece but two objectives: One for watching and one for the camera. It connects through the device's own Wi-Fi to your mobile phone or tablet (no internet connection needed), where you (or others) can watch a livestream of what the dG sees. I think it is set to become a replacement for binoculars for some beginners or moderately advanced birdwatchers who aren't afraid to leave the all-analogue era of binoculars behind.

In order to use the dG, you need to have two charged devices: the dG itself and your phone/tablet. You won't be able to take pictures without a connected mobile device with the installed dG app! And you probably wouldn't want to use the dG just as a pure replacement for binoculars. It has good optics, but those of the smallest Swarovksi Optik model: The CL Companion.

Photos and videos can be transferred to the mobile device via the dG app for further use. Here comes the biggest asset of the dG in my eyes. After downloading photos to your device, they can be shared with the Merlin app (or directly accessed through Merlin), which includes a powerful photo identification module: it identifies birds on the photos you took.

Identifying birds with dG and the Merlin Bird ID app

The dG makes a solid and sturdy first impression, just what you'd expect to get from Swarovski Optik. The monocular design and shape of the device need getting used to, but you will. It appears quite bulky, but is ergonomically designed well with depressions on the underside for a good grip. It appears funny that there is no protection or cover for the objective lenses of the dG. Because of the big open front of the device, I'm worried that these are very prone to get scratched.

The dG has only one button for turning it on/off and for taking photos. While I appreciate the thought of making it as simple as possible, it requires some patience and training to come to a good understanding of how it works. I repeatedly took photos unintentionally when using the focus wheel, which is located very close to the button. I understand that this proximity is not a coincidence, but because of the button's very flat design you won't always feel right away if your finger is on the wheel or on the button.

The socket for the USB cable is a solid metal piece with two big screws. Good! Badly built USB sockets are my main concern in many electronics today, because this is the part that frequently breaks first - making complete devices useless. Only the location of the socket is a bit awkward: It's on the underside of the dG. In order to plug it in (to charge) you have to lay the dG upside down - covering the status lights on top. So you have to turn it around to see if it is fully charged.

Naturally, getting to know and making this electronic device work properly takes much more time than setting up a new pair of binoculars before heading with it out for the first time.

Using the dG to watch

The dG is made to be used for its photo-taking and livestreaming abilities. The optics are a compromise for weight and price. They do the job of finding a bird and looking at it until you press the shutter. But the small eyepiece and small field of view are a little tough if you are used to the more comfortable image of all other models. The 8-times magnification is exactly what I want in the field but the focus wheel doesn't turn very easily. The minimal focus distance is about 2 m (measured).

Connecting dG and smartphone
The dG can connect and stream to up to five devices. I only tried it with my phone (Samsung S10e). You always want a stable Wi-Fi connection between your phone and the dG in order to be able to take pictures. Under some circumstances, the dG kept taking pictures, also when the connection was lost temporaritly. It took me some time to figure out how far away phone and the dG could be from one another, and in which pockets of my backpack I could store my phone to keep the connection live.
A big problem that I encountered was that I constantly lost the connection because my phone automatically turns of WiFi when the screen is dark. I thought this would be an easy problem to fix... but it wasn't! I had to wake up my phone before taking pictures, which is not ideal in the field, when birds turn up, move, and leave again fast. Also, my phone liked to connect to the home WiFi, giving me a hard time to connect to the dG when I was at home.

The dG App
You need to download the dG app to get your dG going. It's simple and has only some features: watching the livestream and taking snapshots, watching and downloading photos and some settings. One setting I used first was to turn down the volume of the sounds the dG makes by default. Within the settings, you can activate "expert mode" to get access to some very basic photographic settings like exposure compensation of white balance. But there's no fast way to change these on the dG itself, so you aren't able to react to suddenly changing light conditions. Therefore I just let everything set to 0 (especially exposure compensation) after some trying.
I didn't get into using the livestream really, so for me the app served the purpose of downloading, deleting or sharing the photos I took with the dG. An issue I encountered here was that photos I deleted in the app weren't deleted on the dG itself. So these popped up again in the app, when I reconnected phone and dG. The ten most recent photos seem to always stay on the dG until they are overwritten by new photos. 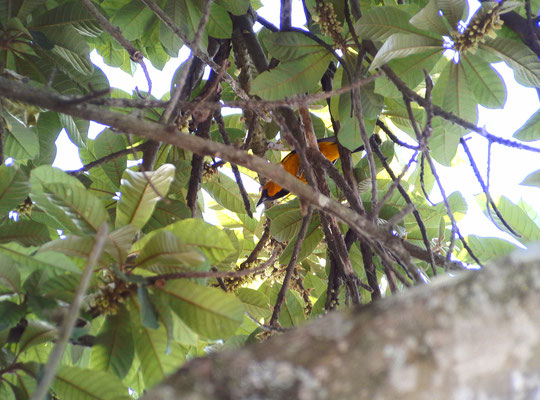 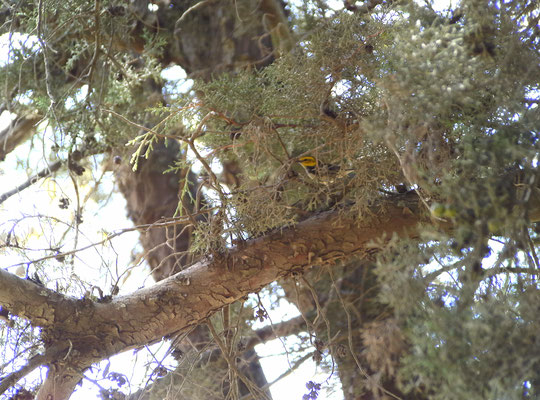 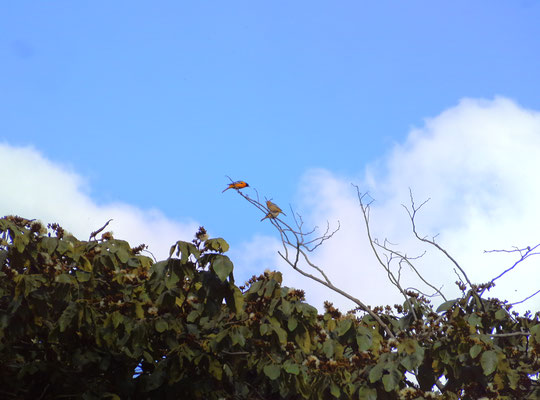 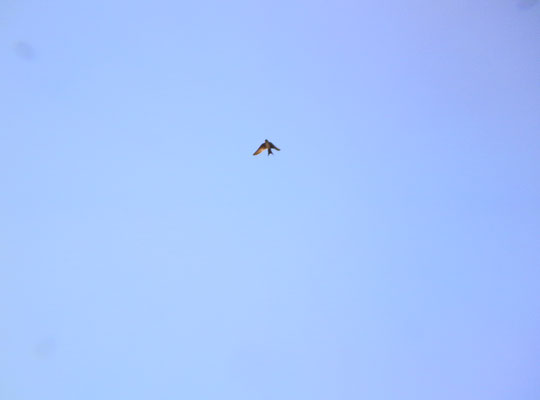 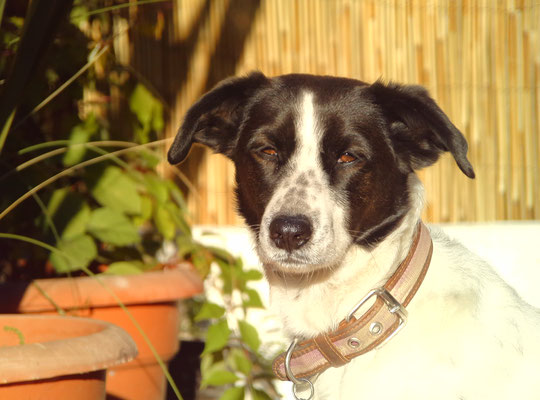 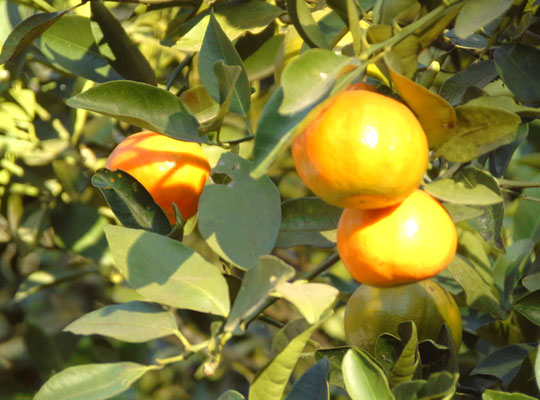 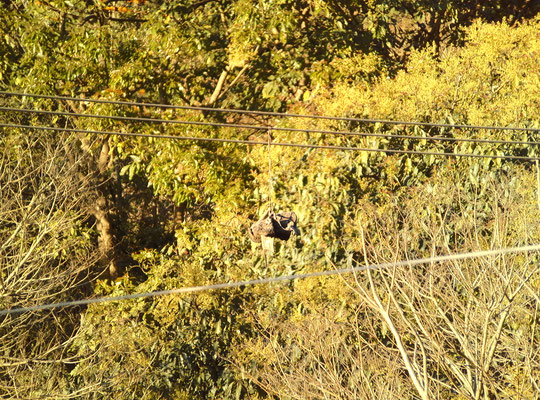 Taking photos and videos
The lens of the camera in the dG has a focal length approximately 400 mm (when comparing the dG to a 400 mm lens on a full-frame Nikon D850 it seemed to have a little less than 400 mm), so it is perfectly usable for record shots of many birds you see in the field. Check out the sample images (full size, untouched jpgs straight from the dG) in the gallery above. The field of view of the monocular is a little wider than the framing of the photos taken (the viewfinder shows more than the final image) and this is indicated by thin black line markings (in square format, the actual photos have a 3:2 ratio though) in the viewfinder. It also has an image stabilizer and an autofocus. All of this works in a snapshot-mode, so you aren't able to see or set photographic details such as aperture, shutter speed, etc. It would be nice to see the shutter speed at least, because it would allow the user to decide whether there's enough light for a sharp image or not. The camera focuses automatically before taking a picture. But since this happens in the camera and not in the viewing-channel of the dG, you cannot see it happening and have to trust and hope for a sharp image. When pressing the shutter, the dG plays the sound of an old analog camera with automatic rewind. Maybe it's time to let go of this sentiment ;)

The dG only has a very small internal storage of 10 photos. This means that photos you take in the field have to be downloaded to the phone all the time. When the connection to the phone was lost, the dG (sometimes) continued to take photos and store them internally - but only up to 10 images, which is about what I took of one interesting bird I wanted to identify later. I would prefer if I could just take a lot of images onto a much larger internal storage and download them later.

Photo ID with the Merlin app

The Merlin photo ID is a great application that can identify birds from photos with astonishing accuracy. You can access photos that were downloaded from the dG to your phone through Merlin and ID unknown birds. Very often (most of the time) Merlin is spot-on. If not, it will give you at least the most likely species (based on the photo ID and data on distribution from ebird). This is what I think the dG is best for: identifying birds on photos with Merlin's help.

The dG certainly enters a new and interesting field. However, to make it a trusted and reliable companion that many birders will appreciated, it will take some adjustments. Some of them: a second button to faciliate operation, and a bigger internal storage capacity. But most of all, the flexibility should be improved, so that taking photos quickly is also possible without connection to a phone.